We are very excited to invite you for the public performance PARTS@WORK#2 on Sunday January 29th, 2023.

PARTS@WORK#2 consists of several pieces - all personal work - of the 1st year students from the Bachelor program ‘Training’.

Free entrance – no reservation is needed
There is a limited capacity, we advise you to come in time.
Doors open at 2h30pm - showing starts at 3pm sharp
End foreseen around 4:30pm

We look forward to your visit!

‘A here’ (work in progress) / ⧖10"
The past is already gone, and the future is not there yet, but now we are here.
Idea: Patric Cunha
Performing: Elena Maria, Ekaterina Varfolik, Guilherme Carvalho, Irene Rojo, Jacob Bousset, Kim Ramiandrisoa, Leticia Ferreira, Patric Cunha and Silke Hamers.

Couple slow dancing #1’ (part of a bigger work in progress) / ⧖5"
Enjoying ambiguity and nothingness.
Supposed to evoque, childhood memories and cliché rom-coms.
Idea by Nicolas Dang
Performed by Adèle Chaput and Nicolas Dang
Soundtrack : Pierre by Barbara. The Sexual Identity of These Snails is Complicated by Smithsonian Channel

‘PASSAR EL CORRENT’ / ⧖7"
The Catalan expression “passar la corrent”, is used when static electricity causes a sort of electrocution when you touch somebody. You feel that with a little handshake with another person, your body reacts as if you would be touching a socket. That is because when two bodies come into close physical contact, there is a possibility of free electron transfer between them. One gives electrons to the other, thereby establishing quite an attractiveness. The consumed energy reappears in the form of an increase in electrical voltage between the two surfaces.
In this piece, we have two bodies sending information to each other as if these electric body reactions were happening. We mix the naturality of our bodies with external electronic devices, as electricity is something human that can always be there when we touch other bodies. Therefore, the object that communicates us is also completing our movement, our dance, our singing.
Singing and dancing share the same instrument, the body, so, what is the difference between singing and dancing? Is this singing that becomes dance? Is that voice or movement?
One body puts the voice, but behind there is another body that defines how we listen to this voice, so, which one is singing? One body is moving because the other makes it move, so which one is dancing? Who is being the artist, the one that shines or the one behind? What would happen if we switch roles? Can we be the other?
Created and performed by Silke Hamers and Irene Rojo
Singer: Silke Hamers

'Vaquero’ / ⧖20"
Investigation on the relationship between clothes, their function when knotted and sound, from an imaginative base related to the color blue and loops.
Performed & created by Elena María Olías García and Nicolás Dang.

‘Is Privilege’ / ⧖10-15"
This work is the result of some studies of the works of the group scene 11 dance company based in Florianópolis directed by Alejandro Muhamed. Through studies on our relationship regarding the social hierarchy in which we lived before our experience at Parts and what we live now. track, text, clothes, all produced by the interpreters.
Performed & created by Patric Da Cunha & Leticia Oliveira Ferreira.

PARTS@WORK is an informal showing open to the public, and consists of personal work of the students and results of workshops. 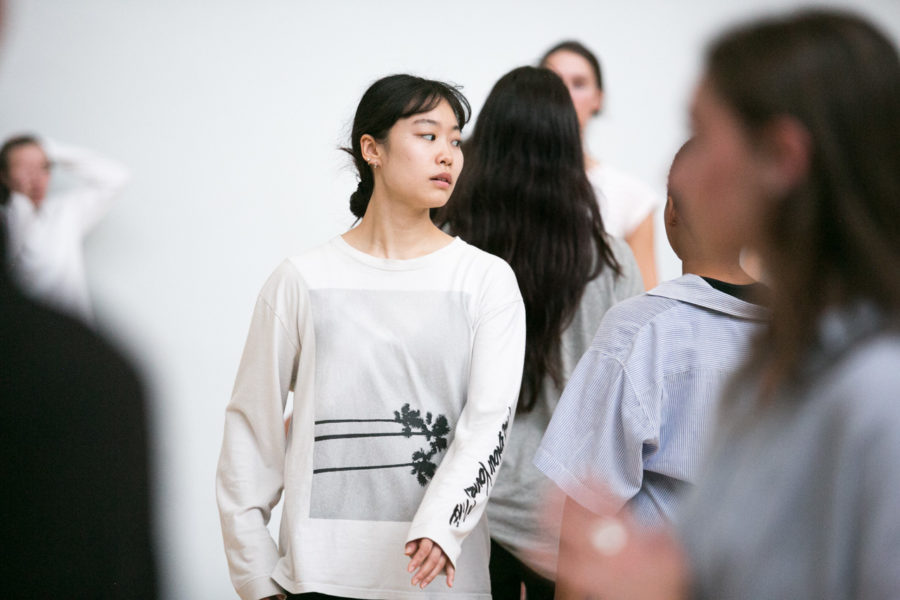